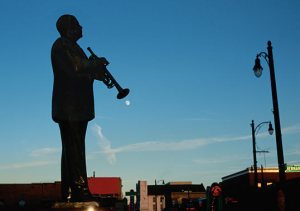 At that very hour some Pharisees came and said to him, “Get away from here, for Herod wants to kill you.”   He said to them, “Go and tell that fox for me, ‘Listen, I am casting out demons and performing cures today and tomorrow, and on the third day I finish my work.   Yet today, tomorrow, and the next day I must be on my way, because it is impossible for a prophet to be killed outside of Jerusalem.’   Jerusalem, Jerusalem, the city that kills the prophets and stones those who are sent to it! How often have I desired to gather your children together as a hen gathers her brood under her wings, and you were not willing!   See, your house is left to you. And I tell you, you will not see me until the time comes when you say, ‘Blessed is the one who comes in the name of the Lord.'”

There is something mournful about the blues and as Elton John says, “That’s why they call it the blues“.

There is a world weary wisdom in the lyrics of a good blues number. It speaks of love lost, life wasted, and the cost of insight. Experience is expensive stuff.

I am no expert, but I do think the blues requires an old soul to write it and an old soul to understand it. If you don’t get it, chances are you haven’t lived much pain and suffering. The words of Louis Armstrong when asked by a reporter what jazz is, are equally true for the blues. Sachmo said, “Honey, if you gotta ask, you’ll never know!”

The blues are born when you have experienced pain and suffering, and have learned the most difficult lesson life can teach, “it didn’t have to be this way!”

I can imagine Nelson Mandela singing the blues when he looks at South Africa sixteen years after liberation where the values of equality, respect and living in a Rainbow Nation have been diluted by immoral power grabbing, self aggrandizement and corruption at the highest levels of government, whilst the abject poor and disempowered are only slightly better off than they were in 1994.

In fact as I walk the streets of the global village, I see, on almost every corner, a weary and sad blues singer mourning the death and defacing of the dream that once was their deepest passion.

I surfed over to Wikipedia and looked at the list of Nobel Peace Prize Laureates and it looked like a list of Grammy Nominees in the category, “Best Blues Album”. Certainly, some of the tracks would be celebratory, almost too much so to be called the blues, but for the most part, they are “true blue”, Blues man.

He sat overlooking the city, “set on a hill” that should, “not be hid” and saw not the vision of his Father, rather he saw a city driven by an economic exploitation of ritualistic religion, where it is estimated that eighty percent of the economy centred around the temple sacrificial system. (Are any of our modern church economies any different?)

As a caring lover of all people, Jesus knew how threatened the vulnerable chicks of Israel were.  The poor, the widows, the outcasts, were at the mercy of the Foxy Herod and the Roman Eagle.  In a homely farmyard metaphor, Jesus likens himself to the vulnerable hen who, despite the danger to herself,  gathers her chicks when the eagle is soaring and the fox is stalking.  Did he know even then that Herod and Caesar would rip him apart at the end?

He remembered that he wasn’t the first to challenge what was wrong with God’s people. In that respect he stood in a long lineage which stretched all the way back to Elijah and the prophets of Baal. Jesus stood in a lineage of Blues singers, which was what Elijah had come to remind him of on the Transfiguration mount.

In reflecting on that lineage Jesus says an interesting thing. He states that it is “impossible for a prophet to be killed outside of Jerusalem”, implying that all the prophets are stoned in the city, which would be the case with false prophets who would be tried in the temple courts and then dragged into the streets for public stoning.

A very interesting example is the stoning of Zechariah. Jesus’ reference to it is recorded in Matthew, ‘Woe to you, scribes and Pharisees, hypocrites! For you build the tombs of the prophets and decorate the graves of the righteous, and you say, “If we had lived in the days of our ancestors, we would not have taken part with them in shedding the blood of the prophets.” Thus you testify against yourselves that you are descendants of those who murdered the prophets. Fill up, then, the measure of your ancestors. You snakes, you brood of vipers! How can you escape being sentenced to hell? Therefore I send you prophets, sages, and scribes, some of whom you will kill and crucify, and some you will flog in your synagogues and pursue from town to town, so that upon you may come all the righteous blood shed on earth, from the blood of righteous Abel to the blood of Zechariah son of Barachiah, whom you murdered between the sanctuary and the altar. Truly I tell you, all this will come upon this generation.‘ [Matthew 23:29-36 (NRSV)]

This is the Zechariah (there were a few) whose name is attached to the Old Testament book, In the eighth month, in the second year of Darius, the word of the Lord came to the prophet Zechariah son of Berechiah… [Zechariah 1:1a (NRSV)]

The event is referred to in Second Chronicles,” Then the spirit of God took possession of Zechariah son of the priest Jehoiada; he stood above the people and said to them, ‘Thus says God: Why do you transgress the commandments of the Lord, so that you cannot prosper? Because you have forsaken the Lord, he has also forsaken you.’ But they conspired against him, and by command of the king they stoned him to death in the court of the house of the Lord.” [2 Chronicles 24:20-21 (NRSV)]

Note: (Did you notice the interesting misquote or editorial glitch? Two Zechariahs are being spoken about. For more on this debate click here)

Of course we know that Jesus is going to incarnate that prophetic statement, when he returns on Zechariah’s colt and the palm waving people call out, “Blessed is the one who comes in the name of the Lord!” and then days later bay for his blood as a false prophet and a threat to National Security.

But that is in the future. Now it is time to sing the blues.

To mourn the missed and rejected opportunities of yielding to the embracing wings of God’s unconditional love, that does not require an industry of sacrifice and an economy of scapegoating.

This Lent, I join Jesus and every forgotten or ignored peacemaker as I too sing the blues. I moan and mourn not only for the missed opportunities in my country and the global village. I mourn for every moment I have been too preoccupied with my own industry and economy, that have kept me from yielding to the outstretched wings of grace. Thank God he is still busy with the second day work of demon driving and healing. There is hope for me still. May I not make the same mistake again.

Such missed moments. Such expensive lessons. Such silly mistakes.

That’s why they call it the blues.