Jesus said to them, “I am the bread of life. Whoever comes to me will never be hungry, and whoever believes in me will never be thirsty. But I said to you that you have seen me and yet do not believe. Everything that the Father gives me will come to me, and anyone who comes to me I will never drive away; for I have come down from heaven, not to do my own will, but the will of him who sent me. And this is the will of him who sent me, that I should lose nothing of all that he has given me, but raise it up on the last day. This is indeed the will of my Father, that all who see the Son and believe in him may have eternal life; and I will raise them up on the last day.” Then the Jews began to complain about him because he said, “I am the bread that came down from heaven.” They were saying, “Is not this Jesus, the son of Joseph, whose father and mother we know? How can he now say, ‘I have come down from heaven’?” Jesus answered them, “Do not complain among yourselves. No one can come to me unless drawn by the Father who sent me; and I will raise that person up on the last day. It is written in the prophets, ‘And they shall all be taught by God.’ Everyone who has heard and learned from the Father comes to me. Not that anyone has seen the Father except the one who is from God; he has seen the Father. Very truly, I tell you, whoever believes has eternal life. I am the bread of life. Your ancestors ate the manna in the wilderness, and they died. This is the bread that comes down from heaven, so that one may eat of it and not die. I am the living bread that came down from heaven. Whoever eats of this bread will live forever; and the bread that I will give for the life of the world is my flesh.”

The notion of Jesus coming down from the heavens or in more modern language, the sky, only makes sense to the world view of his day which was naturally, that of a flat earth. God lived behind the dome that held back the waters over the flat earth. 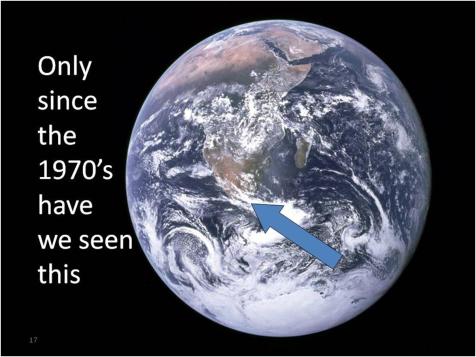 Does this mean that we have to mistrust the words of Jesus? Not at all. What we do have to do as a matter of responsible scripture reading is lift the truth of Jesus’ teaching from the frame of the context in which that truth was taught.

Every religion which wants to retain relevance has to do this with their ancient texts. Not to do this could one of two problems. Firstly the religion would make less and less sense to people who are living in cultures with different world views, or secondly followers of those religions that do not want to translate into modern contexts would find themselves having to practice their religions in forms that would be more and more out of step with modern society. The most cursory look at religion worldwide will offer many illustrations of these two challenges.

It would seem that the more intelligent forms of Christianity are accepting the challenges of modernity and are continuing to attempt to apply the ageless wisdom of Jesus to the reality of the ever expanding body of knowledge and information that is at our disposal regarding the way the world works.

Reflecting on the realities of the Cosmos has affected the practice of our faith in very significant ways.

Allow me to highlight three

We have rediscovered the power of the feminine for our pater-dominated lives.

At present the archaeological record shows that the first artefacts to have been made by homo-sapiens about 30 000 years ago, were figurines of pot-bellied, broad hipped women. 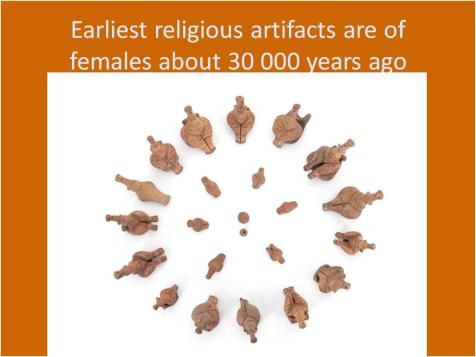 This seems to point to the religious awe that a tenuous tribe would have had for the ability of women to produce offspring to ensure the ongoing life of the tribe. The religion of those first peoples seems to have been strongly feminine, and it was only when agrarian settlements appear that the energy shifted in religion and social life to a male dominated patriarchy and the maternal was replaced by the material energy of landed people. This strong male energy that led us ever outward in exploration and technology, but which also had its shadow side in the oppression of women, the imperialism both of politics and religion; has brought us to the very edge of a mysterious Cosmos that fills us with as much awe as it must have filled our African proto-parents when they walked into the vast world 70 000 years ago! We are once more on the edge of exploration and at the doorway of discovery. We are hungry to know more.

We have returned to the survival priorities of first peoples. 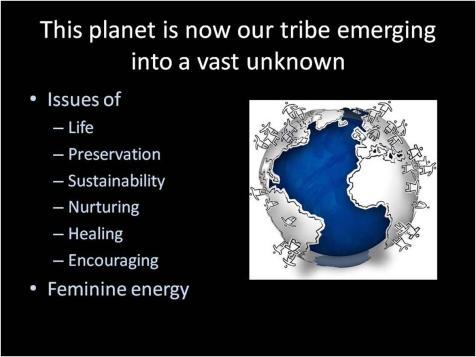 Having passed through the male-dominated phase of exploration and subjugation (some would suggest annihilation) of nature, we have arrived at the place where the old tribal survival priorities now demand that they be our global priorities. Journey, tribe, nurture, sustainability, words that described the values of first peoples are now once again on our agendas. We realise that for the foreseeable future there is only us in this part of the universe. We are the planetary tribe of earth. The survival of the tribe demands an end to any smaller agendas and pursuits that place the welfare of the whole tribe in jeopardy. Our hunger can no longer rob others of their right to heaven’s bread, neither can we hoard Jesus like moulding manna, as if he is only for our nutrition in the church.

We have taken religion from the outside to the place Jesus had directed it to so long ago, the inside, the heart.

Being confronted by this ever expanding Cosmos we have sympathy for the somewhat disputed comment of the first human space traveller Yuri Gagarin who said, “I looked and looked but I didn’t see God.” 14 April, 1961. Those of us who try to be honest with ourselves as we can, have to admit, “Neither have we” It is this confrontation with the silent vastness of space (the name “space”, says it all) that challenges us to either fall into a despairing atheism or to honestly seek for the space where God truly can be encountered. Don Cuppitt the irascible modern, non-church going theologian was heard in an podcast on Philosophy Bites to declare that Jesus was essentially the world’s first Humanist. What he seems to mean by this is that Jesus was one of the first to point to the inner “space” as the most significant for human encounter with God.

Carl Jung of course saw it too, “We are living in what the Greeks called the right time for a “metamorphosis of the gods,” i.e. of the fundamental principles and symbols. This peculiarity of our time, which is certainly not of our conscious choosing, is the expression of the unconscious man within us who is changing. Coming generations will have to take account of this momentous transformation if humanity is not to destroy itself through the might of its own technology and science.”

Jung is also alleged to have said, “If you will not go within, you will have to go without” Living on the Third Rock from the Sun in a rather obscure corner of the universe is not as threatening as it may at first seem. Rather, it has brought us away from outer male dominated ritual forms to inner feminine forms of encounter with the God of the Macro and Micro Cosmoi. The God who invites us as God always has, to integrate our split an divided selves and societies, into the non-dual unity that has always been God’s true nature. Here at this one point of the infinite void of the Cosmos, I encounter in my very being, the One who breaks bread and feeds my soul.

So on this Cosmos Sunday of the Season of Creation, I celebrate the return of the feminine to our thinking, the return to first people’s priorities for survival, and the journey inward that has been necessitated by the encounter with the vastness of the Cosmos.

I am a pilgrim of the one Earth tribe, nurtured by the One, whom we all call God. The God of Bread from heart and heaven. The Baker at the heart of the Universe.