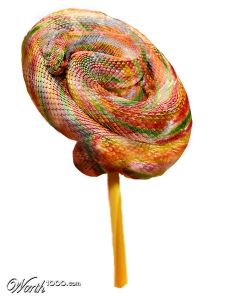 John 3:14-21
And just as Moses lifted up the serpent in the wilderness, so must the Son of Man be lifted up, that whoever believes in him may have eternal life.
‘For God so loved the world that he gave his only Son, so that everyone who believes in him may not perish but may have eternal life.
‘Indeed, God did not send the Son into the world to condemn the world, but in order that the world might be saved through him. Those who believe in him are not condemned; but those who do not believe are condemned already, because they have not believed in the name of the only Son of God. And this is the judgement, that the light has come into the world, and people loved darkness rather than light because their deeds were evil. For all who do evil hate the light and do not come to the light, so that their deeds may not be exposed. But those who do what is true come to the light, so that it may be clearly seen that their deeds have been done in God.’

Living as I do in South Africa I have grown up around snakes. I remember as a small boy in my first year at school, living in the sub-tropical lowveld of Nelspruit . My mother spoke no Zulu, but the first word she learnt was “I’Nyogka!”.  Screamed at the top of her lungs it brought Isaac, the gardener, running with a shovel to dispense the terror. Usually a deadly black mamba or boomslang.

I was taught that snakes were to be feared, and it was only later in life that it began to seep slowly into my consciousness that snakes are probably more afraid of us than we are of them. Truth be told, when I encounter a snake today, I realise that seepage isn’t complete. There is still a powerful residue of fear.  I have believed the Christian mythology that taught me snakes are evil.

So I ask myself, why would lifting up a serpent, the symbol of evil, be healing?  Why would the Son of Man, identify with the serpent?

In the Old Testament we read that the Israelites set out from Mount Hor, where Aaron was buried, to go to the Red Sea. However they had to detour around the land of Edom (Numbers 20:21, 25). Frustrated and impatient, they complained against Yahweh and Moses (Num. 21:4-5). This is the last of the complaint stories in the Book of Numbers. Just east of Palestine, God plagued them with “fiery serpents” for their murmurs against Him. For the sake of repentant ones, Moses was instructed by God to build a serpent of bronze that was used as an instrument to heal those who looked upon it

According to Lowell K. Handy, the Nehushtan was originally the symbol of a minor god of snakebite-cure within the Temple. The name of this god is unknown, however, the use of “brazen serpent” is a subtle play on words that are based on the metal that the snake is made of: נחש (nachash) means “serpent”, while נחשת (nachoshet) means “brass” or “bronze”. (More here)

Is it going too far then to speculate that by comparing the Crucifixion with the Nehushtan ritual of Moses, Jesus is teaching that we need to confront our fears if we want to be healed?

The conversation with Nicodemus that dark Jerusalem night was literally a life and death interaction. These were the topics on the agenda.
‘Rabbi, we know that you are a teacher who has come from God; for no one can do these signs that you do apart from the presence of God.’
Jesus’ response speaks about being born from above and then he speaks of his own death in the gospel passage for this Sunday.

As primary as my ophidiophobia is the assumption that Jesus is speaking to Nicodemus about saving his soul by being “Born Again”. I was taught at my Sunday School teacher’s knee that John 3 is only about being saved.
I find myself wondering if the heart of the conversation isn’t “Salvation” as my evangelical upbringing has taught me, as much as it is Jesus confronting Nicodemus with humankind’s two greatest fears?
The fear of change, “no one can see the kingdom of God without being born from above.” and the fear of death (the ultimate change), “just as Moses lifted up the serpent in the wilderness, so must the Son of Man be lifted up, that whoever believes in him may have eternal life.”

The longer and the deeper I journey in my life as a Christ follower in the church, the more I am aware of how I resist change and how much I think of my own death and the death of the Church.

It is worth remembering that when Jesus referenced the Nehushtan ritual it had been destroyed as part of the repertoire of Jewish Liturgy. He was calling upon a practice that had been outlawed in the time of Hezekiah

2 Kings 18:4 He removed the high places, broke down the pillars, and cut down the sacred pole. He broke in pieces the bronze serpent that Moses had made, for until those days the people of Israel had made offerings to it; it was called Nehushtan.
Scholars suggest that this was an act of removing Egytian cultural references to endear himself to Assyria. An abortive attempt for he fell into thrall of Assyria some years later anyway. (You can delay but never fully avoid confronting your fears)

Nicodemus the scholar would have known all this background.
The fact that he had come to Jesus indicated however, that his orthodoxy was no longer serving his needs. He needed something more than the dogma of the day.

In Jesus, Nicodemus found what he was seeking. One who could help him face the sum of all his fears, change and death.
It transformed Nicodemus forever. Jesus was leading Nicodemus, the Orthodox Jew to salvation, but not as Orthodox Christians may believe!

As I contemplate the gospel this week, I wonder what could become of me, if I allowed myself to see, in the Cross of Jesus, the concentrated essence of all my fears being lifted into consciousness and awareness, and then waiting patiently to see what God can do with them, and me?

Fear on a stick?  It is about salvation after all!