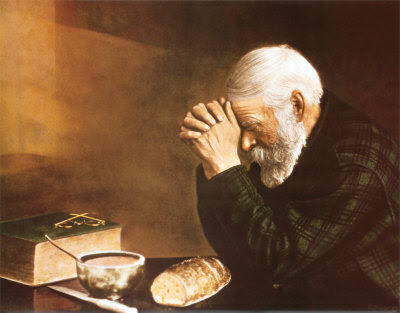 Jesus said to them, “I am the bread of life. Whoever comes to me will never be hungry, and whoever believes in me will never be thirsty. But I said to you that you have seen me and yet do not believe. Everything that the Father gives me will come to me, and anyone who comes to me I will never drive away; for I have come down from heaven, not to do my own will, but the will of him who sent me. And this is the will of him who sent me, that I should lose nothing of all that he has given me, but raise it up on the last day. This is indeed the will of my Father, that all who see the Son and believe in him may have eternal life; and I will raise them up on the last day.” Then the Jews began to complain about him because he said, “I am the bread that came down from heaven.” They were saying, “Is not this Jesus, the son of Joseph, whose father and mother we know? How can he now say, ‘I have come down from heaven’?” Jesus answered them, “Do not complain among yourselves. No one can come to me unless drawn by the Father who sent me; and I will raise that person up on the last day. It is written in the prophets, ‘And they shall all be taught by God.’ Everyone who has heard and learned from the Father comes to me. Not that anyone has seen the Father except the one who is from God; he has seen the Father. Very truly, I tell you, whoever believes has eternal life. I am the bread of life. Your ancestors ate the manna in the wilderness, and they died. This is the bread that comes down from heaven, so that one may eat of it and not die. I am the living bread that came down from heaven. Whoever eats of this bread will live forever; and the bread that I will give for the life of the world is my flesh.”

I find it difficult to understand how the message of Jesus that was so clearly universal in its scope and in its proclamation, could have become what it so often is today.  Narrow in spirit and accessibility.

To Jesus, every person who came to him was already being drawn by the love of the heavenly parent whose desire for union with prodigal children is the very essence of God’s being.

The word “all” features large in the teachuings of our Lord, as it does here, “…they shall all be taught by God.”

Yet the most cursory look at most of the church that claims to represent and embody the Spirit of Jesus, will reveal a club that it is quite difficult to get into and if you do, will teach you early on just who it is that doesn’t belong.

How did this happen?
The simple answer lies with our old friend the ego.
That inner energy so essential in the formation of the indentity that in adult life becomes threatened by anything that could mean its dissolution into a greater Energy of being called the True Self or God.

Ego wants accolades.
Ego thrives on achievement and when the prize of the spiritual enterprize is eternal life, the ego needs to at least feel that it played a part.

Jesus wrecks the ego expectations of his hearers.
There is nothing for your ego to do here.
Salvation, Enlightenment, Eternal Life, Wisdom, are not the products of human endeavour as your bread is.

For you to have earthly bread requires the sweat of your brow. That’s your creature curse carried from Adam.
Yet foreshadowed by the manna of the wilderness and now fully revealed in me; the bread of life is offered to all who are hungry enough to trust that five barley loaves and two fish can feed a multitude.

This bread is me and it is offered for the life of the whole cosmos (world).
There is nothing to achieve or to do. Which means you cannot decide or designate who gets some and who doesn’t.

You are not the baker nor the distributor.
You are just another hungry pilgrim on the hillside or in the wilderness.
Want a slice?