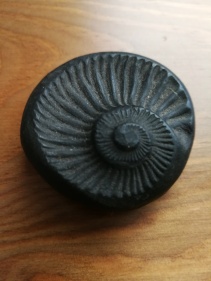 On a table that holds my precious things I have a small black ceramic disk I bought in India. Made from a black clay it has the imprint of a spiralled shell. These disks are common at tourist sites and are made by pressing wet clay into fossil beds thus creating a positive image of the creature that became fossilised millions of years ago. The disk has been fired to make it durable and is iconic.

It records a life that ended eons ago. A bit like the rubbings one can do on famous gravestones in English churchyards, it is a proof of existence similar to the forms pensioners complete each year to verify they are alive to receive their monthly payouts.
The original shell creature fossilised in the sediment of India, had no consciousness of its own existence. It simply went about its life absorbing food, transforming it into energy, moving forward and procreating itself until its life ended.

By the time it became a fossil it had probably been dead for millennia. Perhaps its species had already died out completely? Was this creature wiped out in one of the five cataclysmic extinction events that are part of the earth’s evolutionary history?

It’s strange to realise that until the 19th century we didn’t even believe in extinction. So in America, you had President Thomas Jefferson sending Lewis and Clark to explore the Northwest regions in the hope they would find mastodons roaming around. Mastodon bones were fashionable at the time. There was a very famous one unearthed in New York and displayed in Philadelphia so people assumed they must still exist somewhere.

It was the French naturalist Georges Cuvier who around Jefferson’s time came to the realisation that if no one was seeing the animals from which the bones came, they must be extinct. At the same time European colonists were sending all these bones of exotic creatures, that couldn’t be found alive, back to their motherlands . So Cuvier came up with a theory of extinction which preceded Darwin’s theory of evolution by half a century. We knew that some species were extinct before we knew how they originated and there is a significant consolation in that sequence of discovery.

To become aware of the extinction of life before knowing how that life came to be, is to put things in the right order.
It’s why in every spiritual tradition the contemplation of death precedes the experience of what life means.

Ask any person diagnosed with cancer of the truth of this. They will confirm that knowing you have a disease that wants to kill you makes you appreciate every moment you are alive. Being made aware of our mortality enhances our daily living.

So my little black disk is a helpful reminder for me. This imprint of an extinct creature from millions of years ago remembers an extinct life. Gone forever as I will be.

But for me, not today!