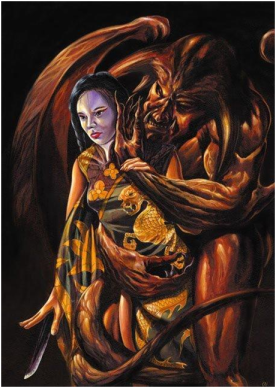 Then they arrived at the country of the Gerasenes, which is opposite Galilee. As he stepped out on land, a man of the city who had demons met him. For a long time he had worn no clothes, and he did not live in a house but in the tombs. When he saw Jesus, he fell down before him and shouted at the top of his voice, “What have you to do with me, Jesus, Son of the Most High God? I beg you, do not torment me”— for Jesus had commanded the unclean spirit to come out of the man. (For many times it had seized him; he was kept under guard and bound with chains and shackles, but he would break the bonds and be driven by the demon into the wilds.) Jesus then asked him, “What is your name?” He said, “Legion”; for many demons had entered him. They begged him not to order them to go back into the abyss. Now there on the hillside a large herd of swine was feeding; and the demons begged Jesus to let them enter these. So he gave them permission. Then the demons came out of the man and entered the swine, and the herd rushed down the steep bank into the lake and was drowned. When the swineherds saw what had happened, they ran off and told it in the city and in the country. Then people came out to see what had happened, and when they came to Jesus, they found the man from whom the demons had gone sitting at the feet of Jesus, clothed and in his right mind. And they were afraid. Those who had seen it told them how the one who had been possessed by demons had been healed. Then all the people of the surrounding country of the Gerasenes asked Jesus to leave them; for they were seized with great fear. So he got into the boat and returned. The man from whom the demons had gone begged that he might be with him; but Jesus sent him away, saying, “Return to your home, and declare how much God has done for you.” So he went away, proclaiming throughout the city how much Jesus had done for him.

It is a tricky task when reading scripture not to force too much modern symbolism out of nor into the reading which, it must be acknowledged, comes to us across a twenty century cultural and historical divide. So having paid my dues to decency, that is exactly what I am going to do with this passage simply because it begs to be read at all its rich levels of meaning.

I am intrigued by the context of this miracle. Jesus has crossed over the lake of Galilee, and has entered the wilderness area of the decapolis (ten cities). We should not be surprised that Jesus has crossed over. He is the consummate, “fence jumper” isn’t he? Put a label, a prejudice, a social barricade before Jesus and before long he will, “cross over”. It is thus not surprising that in this wilderness area of the Trans-Jordan, Jesus encounters demons. This wilderness was after all the place where the scapegoats had for centuries been driven with their shadow burden of Israel’s sin. This wilderness was the place of Israel’s projections. Similar perhaps to how the continent of Africa has been scapegoated with all the shadow material of the Euro-American high priests placed on its people’s dark skinned shoulders?

Jesus goes to the repository of shadow material.

The fact that Jesus encounters a naked, demoniac (psychotic?) is not surprising. What is surprising is that the fence jumping Jewish Rabbi is not averse to an encounter with this frightened and frightening person. All the rules of culture and religion dictated that it would be best to ignore and avoid a person like this.

The demoniac on the other hand comes to Jesus and knows who he is. “What have you to do with me, Jesus, Son of the Most High God?” He also is reluctant for an encounter with Jesus. “I beg you, do not torment me” Here is a person robbed of dignity. Exposed and shamed, symbolised by his nakedness and excluded by reference to his location in the tombs.

Jesus’ response is to inquire as to the man’s real identity. By asking his name, Leslie Weatherhead suggests, Jesus is asking a question equivalent in the day to a therapist asking in our day, “How did it all begin? What power is it that is over you“. The insight that emerges in the narrative suggests that Jesus might have spent a long time in this conversation drawing closer and closer to this rejected and abused human being to get him to a place of trust where he could share his story (his name) with Jesus. Weatherhead goes on to speculate that perhaps the reference to the name “Legion” may be a pointer to the fact that the man was naming atrocities committed by the Roman Legionaires who controlled the Decapolis.

Whatever the illness of the man, Jesus sets him free and liberates him from the abysmal energies at work in his life. No wonder that the man deeply desires to stay with his divine therapist from then on, and how skilful of Jesus not to encourage that dependence but to set the restored man free to be himself, and not a slavish dependent disciple? I wonder if, in our ministry as churches, we are as generously skilful?

I suppose I really should stop here, with this psychological interpretation that would be acceptable to us as preachers, and our congregations. I really should stop, but there is a question haunting me in the right outfield of my mind. I have to notice it.

The question is, “In what form is this Demoniac representative of people haunted by legions of hurtful and abusive experiences from the Church?”  Is the church the demoniser?

If it is true that the demoniac symbolises the demonised members of society who have been stripped of their identity and clothing and who are living in the tombs, then it must be equally true that Jesus wants to encounter those very people and bring them back to healing and community.

Space and time does not permit me to begin naming the thousand and one members in this legion of abuse and shaming commanded and executed by the church. Let me begin the current  list and leave you to complete it.

Racism and slavery, sexism and patriarchy, homophobia, paedophilia,… The legion of fear based “tactics of exclusion” that has many living in the tombs having forgotten their identity as children of God to the extent that they beg Jesus to leave them alone.

Hear the good news, “Jesus is a fence jumper!”

He will go to the shadow wildernesses created by our fears and projections and liberate our scapegoated sisters and brothers from their abysmal exclusion. Having done this he will command us to continue this work in his name.

After all, was the heyday of the church not when we dwelt in the catacombs ourselves?