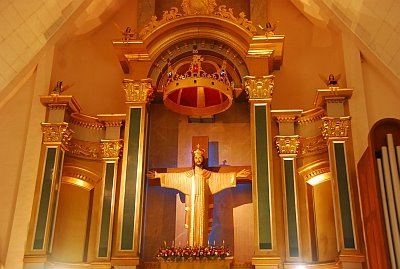 And the people stood by, watching; but the leaders scoffed at him, saying, “He saved others; let him save himself if he is the Messiah of God, his chosen one!” The soldiers also mocked him, coming up and offering him sour wine, and saying, “If you are the King of the Jews, save yourself!” There was also an inscription over him, “This is the King of the Jews.” One of the criminals who were hanged there kept deriding him and saying, “Are you not the Messiah? Save yourself and us!” But the other rebuked him, saying, “Do you not fear God, since you are under the same sentence of condemnation? And we indeed have been condemned justly, for we are getting what we deserve for our deeds, but this man has done nothing wrong.” Then he said, “Jesus, remember me when you come into your kingdom.” He replied, “Truly I tell you, today you will be with me in Paradise.”

I grew up believing that Jesus Christ was the name of the man I heard about in Sunday school. He was white, had long blond hair and was usually carrying a lamb around in his arms.

It was only when I began to study theology that I realised that Christ wasn’t Jesus’ last name. I had thought he was Jesus Christ just like I am Peter Woods. I learnt that Jesus, a teaching rabbi from Nazareth had been put to death during the governance of Pontius Pilate, and that outside of the biblical record that was all that was known about him historically.

Inside the biblical writings, (which cannot be used historiographically – that would be like using a reference from your mother when applying for a job!), this teacher Jesus had been experienced as one who fulfilled the expectations of Israel for an anointed one, whom they had called “Messiah” or in Greek “Christos”.

I also learned that recognition as the Jewish Messiah was not the end of the evolution of Jesus’ name, because as the Good News (Gospel) spread through the world after Jesus day, it met up with Greek philosophy. The Greeks, particularly the Platonists, had a notion of a divine ordering principle which they called the Logos. Judaism had already met Platonism and Philo (20 BCE – 50 CE) the Jewish Alexandrian had prepared the way by postulating that the Logos was “God’s blueprint for the world”

So when Christ followers met the Greek philosophers there was this “Aha!” moment when Jesus, of Nazareth the Jewish Christos was experienced by the Greeks as being the Logos. So, early on in the development of Christian theology Jesus of Nazareth, who was recognised as the Christos (Anointed one), came to be seen also as the divine Logos (The unifying, creative principle at the heart of the Universe John 1:1= “In the beginning was the Word (logos), and the Word was with God and the Word was God”…) This is echoed in Paul where he writes in Colossians 1:17 “And he is before all things, and in him all things hold together”

It was the Christian theologian Justin Martyr (c 150 CE) who made the formal connection by identifying Jesus as the Logos.

Thus Jesus of Nazareth who had been experienced by his followers as the Christos (anointed one) came also to be experienced as the Logos, (God’s blueprint for the world) Also, did you notice how many times I used the word experience in describing this journey from Jesus to Christos to Logos?  We have to remember that our beliefs are  our attempts to explain our experiences.

By the time I was finished with my academic study of theology, I (sort of) understood that the proper name for the one I follow, is Jesus the Christ and Logos of God, although he insists that I just call him “my friend”.

Now when we celebrate the Feast of Christ the King at the end of the entire Christian Year, we are making faith connections and saying that in Jesus of Nazareth, we believe, Gods blueprint for the world, is revealed. That is why we follow, reverence and promote Jesus to the world.

However, this feast of this tripartite faith union of Jesus, Christos, Logos, also demands of us some critical and clear thinking so that we may be honest with ourselves. If we are going to continue to make sense to the world, we are going to have to understand this evolution of understanding that saw Jesus of Nazareth, the carpenter’s son, the rabbi, become firstly the Christos of Jewish expectations, and later the Logos of Greek philosophy.

This I propose to do by offering some questions for your prayerful consideration. I am not going to suggest full answers because I believe the best theology is done by each of us bringing our logic (logos) and experience to bear on these questions.

Question one: Did Jesus of Nazareth think of himself as the anointed messiah (Christos) or the unifying blueprint of the universe (Logos)? A simple reading of the gospels would answer yes. Jesus affirms Peter for saying, “You are the Christ, the Son of the Living God”. Honest biblical scholarship demands though that we ask, how a Galilean fisherman could have come to such a sophisticated philosophical notion? Could this be the editors of the gospels putting words in Peter’s mouth to express the later understanding of the church?

Question two: Has the Logos energy of God (the creative unifying blueprint of the universe) only been manifest and experienced in the life of this one Jesus of Nazareth, or could there have been others in History?

Question three: How much of what we reverence in Jesus, was his intention? Bearing in mind that Jesus is recorded as saying seventeen times in the gospels, “Follow me” and NEVER does he say “Worship me”

However, as I consider how I have come to this position, and how we as church have explained and constructed it, I have to acknowledge that it is not clear, that Jesus is the only manifestation of God’s Logos in human history nor that Jesus considered being equal with God important ( Phil 2 “who, though he was in the form of God, did not regard equality with God as something to be exploited, but emptied himself, taking the form of a slave, being born in human likeness.”). It seems more reasonable to me, that the Divine Logos is bigger than one religious creed or cultural experience.

What is abundantly clear from the life and teaching of Jesus as I have studied and experienced them is that Jesus became recognised as Christos and Logos, by living as a servant of humankind and as slave of compassionate love. Our King is a Servant!

6 thoughts on “Jesus…who? (Feast of Christ The King)”