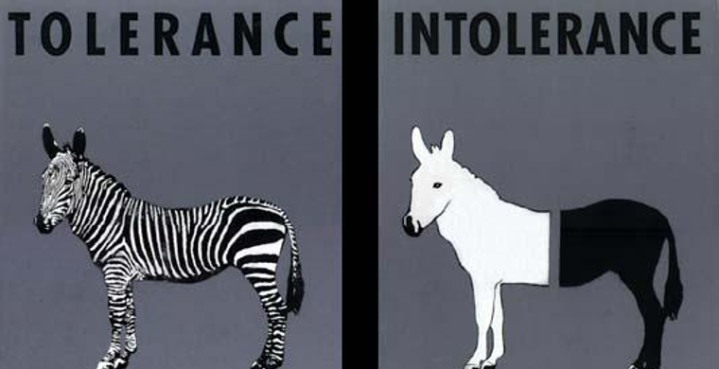 “You get what you tolerate”, was tattooed on the inside of her forearm. I suggested “You get what you negotiate”, she was adamant and anyway it was her arm! I didn’t argue but I did ruminate.

We really are becoming less and less tolerant. Especially in matters of faith. Fundamentalism,a relatively new phenomenon and a reaction to the Modernism and Humanism of the late 19th and early 20th centuries is deeply suspicious of change. It attacks any new viewpoint in ethics, social behaviour and human rights and yet is the fastest growing sector of all religions not just Christianity.

In Judaism it’s Zionism and Askenazism and in Hinduism the Indian BJP movement. In Buddhism the 969 movement in Burma is extremely intolerant of Muslim Rohingas, and Islam is disproportionately caricatured as only producing Jihadists.

It would be naive to assume that fundamentalism is about religion. These zealots may practice their faith aggressively but in almost every case fundamentalism pursues some nationalist agenda. Religions falter when they lose their essential focus on spreading goodwill and making the world a better place, and are instead seduced by power and privilege for only their members. At that exact point a nationalist agenda will embrace religion to spread the lie that only certain lives matter.

But how do these nationalist-fundamentalist intolerants find a foothold in civilised democratic countries as they do? The ironic answer takes us back to my friend’s tattoo. “You get what you tolerate.”

Some of the world’s most sophisticated nations have fallen prey to militant fundamentalism simply because they regard religious tolerance as the politically correct thing to do. Religious tolerance in Europe only appeared after the French Revolution when one of the proto-republic’s founding philosophers Voltaire was banished from France and lived in England for two years. There he penned twenty four “Letters concerning the English nation” to explain the islanders to a friend back home.

A surprised Voltaire writes, “This is the country of sects. An Englishman, as a freeman, goes to Heaven by whatever road he pleases.” The statement had profound implications for any citizen of France, a nation that had almost destroyed itself in order to establish Catholicism as the only practised religion. Now Voltaire saw that English society was as bigoted as his homeland and how only Anglicans made it in politics and power, but he noticed when it came to business, “the Jew, the Mahometan (sic), and the Christian deal with one another as if they were of the same religion, and reserve the name of infidel only for those who go bankrupt.”

So in England religious diversity was easier to tolerate than financial failure and where politics always bedeviled religion, money made anything tolerable.
It was this free market and business openness that created the religious tolerance which empowered progress in the West.

Sadly with the rise of fundamentalism and the reactive intolerance of America and Brexit so evident, one can only expect the reversal of that progress in years ahead.